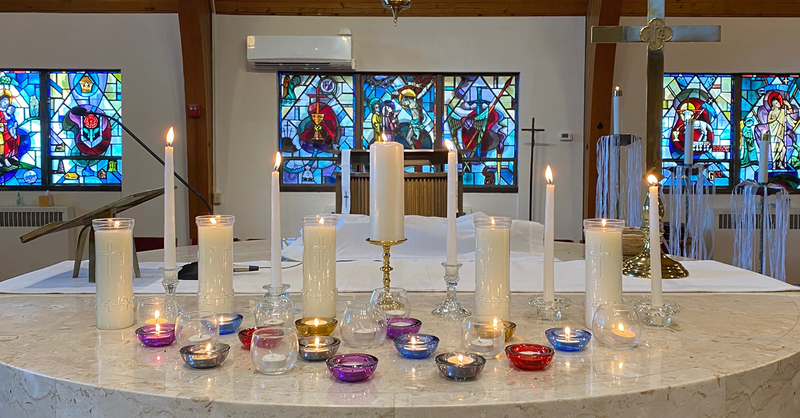 When Mary came where Jesus was and saw him, she knelt at his feet and said to him, “Lord, if you had been here, my brother would not have died.”

When Jesus saw her weeping, and the Jews who came with her also weeping, he was greatly disturbed in spirit and deeply moved. He said, “Where have you laid him?”

They said to him, “Lord, come and see.” Jesus began to weep.

So the Jews said, “See how he loved him!”

But some of them said, “Could not he who opened the eyes of the blind man have kept this man from dying?”

Then Jesus, again greatly disturbed, came to the tomb. It was a cave, and a stone was lying against it. Jesus said, “Take away the stone.”

Martha, the sister of the dead man, said to him, “Lord, already there is a stench because he has been dead four days.”

Jesus said to her, “Did I not tell you that if you believed, you would see the glory of God?” So they took away the stone.

And Jesus looked upward and said, “Father, I thank you for having heard me. I knew that you always hear me, but I have said this for the sake of the crowd standing here, so that they may believe that you sent me.”

When he had said this, he cried with a loud voice, “Lazarus, come out!” The dead man came out, his hands and feet bound with strips of cloth, and his face wrapped in a cloth.

Jesus said to them, “Unbind him, and let him go.”

It was 2015. I got this call. My brother-in-law, Bret, had been involved in an accident. He was working in the grain bin, and the dry rot on the walls collapsed and buried him alive.

You have to understand, this was an industrial grain bin. Firetrucks look like toys next to these buildings. Though it had just happened, you instantly know what they are going to find. I fell down and prayed for the next hour. I didn’t know what to pray for, because if they hadn’t found him by the time someone was able to call me, you just know. Quickly my prayer simply turned to a request for peace.

An hour later I was on the phone with my Bishop and then Delta Airlines. I don’t know how either of them made sense of my words, because the tears were so thick I could hardly speak or even breathe.

Yet even with that divine perspective, when Jesus comes to Bethany and finds out that Lazarus is dead – even having God’s perspective and knowing what was going to happen – Jesus wept.

Today, we remember and celebrate the saints.

But what makes a saint?

Twelve days after I graduated high school, one of my classmates died in a car accident. He had been drinking, and he lost control of the car and wasn’t wearing his seatbelt.

I have to admit, I didn’t really like this kid. I’d been in school with him for half my life at that point, and I’d always felt he was a jerk. He wasn’t the worst kid in school by any means, but I wasn’t sure if he had any redeemable qualities.

It was 2006. 5 years since the towers fell on September 11th. And they announced that today they would be hanging Saddam Hussein. Someone who’s legacy, at least from the American perspective, could be labeled as all bad without an ounce of good.

But I found myself praying in the hour leading up to the hanging that God would forgive him. I’m a Lutheran, so I know my good deeds aren’t what gets me into heaven, and no one else witnessed my prayers. So it wasn’t for any ulterior motive that this prayer came out of me, but I felt the need to pray for Saddam.

I think, if I remember right, what I was feeling in my soul was this conviction that evil must not keep its grip on our reality, that hate must not control our actions, that the only way to break the cycle of violence is to not let the violent make us violent in return.

Who is a saint?

Could my brother-in-law be a saint? What about my classmate? Saddam Hussein?

For the Roman Catholics, saints are those who have obtained heaven. They have an extra day called All Souls Day anyone else who has died but not yet reached heaven.

From the Lutheran perspective, my brother-in-law and classmate are both saints, but Saddam Hussein definitely is not.

It's not that simple

But for how broad Luther’s definition of saints is, I don’t think it’s really that simple.

In Paul’s letter to the Romans, he asks what the difference is between Jews and Gentiles (Christians, at the time, could still be part of the Jewish community). Jews have the Law given by God, and they break it. Gentiles have the natural laws, the sense of what’s right and wrong that even Adam’s apple couldn’t erase, and the violate the laws all the time.

So there really is no difference, because they all fall short of God’s glory. They are all sinners, every single one.

We all mess up

In other words, we all mess up and do things wrong. All of us.

In the same way, by the cross of Christ, redemption is also available to all. Jews and Gentiles alike. You, me, Afghan refugees, and the Taliban.

Christ’s righteous act leads to justification and life for all, Paul says. For all. And to be justified, to be made righteous – that’s what holiness really means. Sometimes we call this sanctification – the process of God removing all that is wrong with us until only what is right is left.

So who’s a saint and who isn’t?

All we can say for certain is that we have faith that God’s grace is upon us.

After that, well, here’s every funeral sermon I’ve ever preached, regardless of whether they were baptized or not: This person, whoever they were, led a life. That life had some moments that weren’t very good. I’ve been told a few of their sins, but honestly, I’m sure that’s only scratching the surface. But there are also signs of Christ’s redemption at work in them. Here are moments that remind me of the image of God. Here are stories that sound like Christ’s love. That’s it.

Here’s a human who had their problems, but I also see signs of God’s grace. For me, that’s what make a saint. A saint is someone who reflects some aspect of the image of God to others, who has moments that sound an awful lot like the love of God.

Saints aren’t perfect, at least not in this life, but they have moments of grace, moments when God’s love shines through, often despite their best intentions. Even if that grace is as simple as someone cried for them, someone prayed for them. Because grace, in it’s purest form, isn’t about what they did, but about how God loved them.

Today Jesus wept. We know nothing about Lazarus but that. Jesus wept for him. And that’s enough to know Lazarus was a recipient of God’s grace.

There’s one more thing I regularly say at funerals: Our loved one, though they are dead, remain alive in each of our hearts. Who they are, what they’ve done, the love we shared – that’s still alive. And if they can live on in our hearts, how could we imagine anything but that they are truly alive in God’s heart?

You’ve been invited to write down the names the saints who have died in this past year who were important in your life. Who’s a saint? The definition is pretty simple: If you believe Christ came to save them, if you think Jesus wept or prayed for their forgiveness, today we honor them because we trust that God loved them.

A Criminal for President

What is a Saint?